Contrary to the promotional campaign and the notions about the film that are created from its trailer and other publicity material, Luv Shuv Tey Chicken Khurana is not a comedy. At least not an outright laugh riot, no. The film is a delicate look into the mundane and is a slice of life drama with a good sense of humour.

The film tells the story of Omi Khurana, who, in order to clear his debt to a goon in London, comes back home to raise money. There, he finds his family – a senile grandfather, a loving aunt, a strict uncle, a cousin and a crazy uncle Titu. Omi soon realises that the only way to get the money is by selling his grandfather’s Dhaba which has been shut ever since his grandfather lost his bearings. However, the recipe of Chicken Khurana is a highly elusive entity and Omi tries to recreate the brilliance, thanks to the help from his college sweetheart, Dr Harman, who is engaged to his cousin now. All doubts, all predicaments and all past grudges assemble in a pot as Omi’s grandfather dies with the secret recipe buried in his chest. The pot is lit from under and a delicious drama cooks itself. 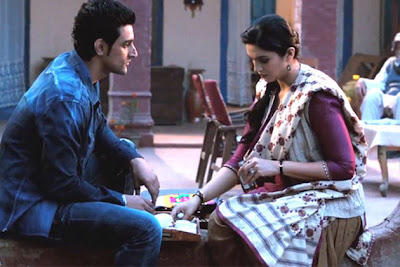 Subtlety is the primary parameter of this film and at times, barring the language, builds an ambience of a well crafted film from Central or Western Europe. However, the reminders Omi keeps getting about his impending debt breaks the subtle drama and points towards a crass attempt at making everyone understand the plot. The screenplay is such that most of the first half is spent simply building the premise. But, like any good recipe requires more time in making the ingredients ready, the film chops, cuts and grinds the ingredients before lighting the stove in the second half.

Director Sameer Sharma has shown a never-seen-before side of Punjab with minimum stereotypes and looking at people as people and not mere cut outs. The setting of rural Punjab fits well with the other elements of the narrative and the characters look like they belong to the place. Kunal Kapoor as a confident ambitious young lad gives his character of Omi Khurana the perfect justice. This is perhaps his return to the league of actors where he truly belongs. Huma Qureshi is magnificent as Harman, and after her quiet performance in Gangs of Wasseypur (which was mainly about men trying to kill each other) she has proven her mettle in a much more significant role this time. The overall cast ensemble are an extension of the setting and Rajesh Sharma as Titu Mama is one of the better supporting roles we’ve seen this year.

For a mainstream film, Luv Shuv Tey Chicken Khurana is a refreshing change going into the festive season where big productions will churn out multimillion star studded films. The motifs and themes used by the director, be it Harman’s helmet, Jeet’s glass eye, or the crow which is apparently Omi’s deceased grandmother suggest the depth of work that has gone into making this simple film.

In a week where James Bond hits the screens, this film is going to make news for the right reasons. A light-hearted story of a small group of people told in a simple yet elegant way, Luv Shuv Tey Chicken Khurana is a pleasant surprise from a masterchef in the making.